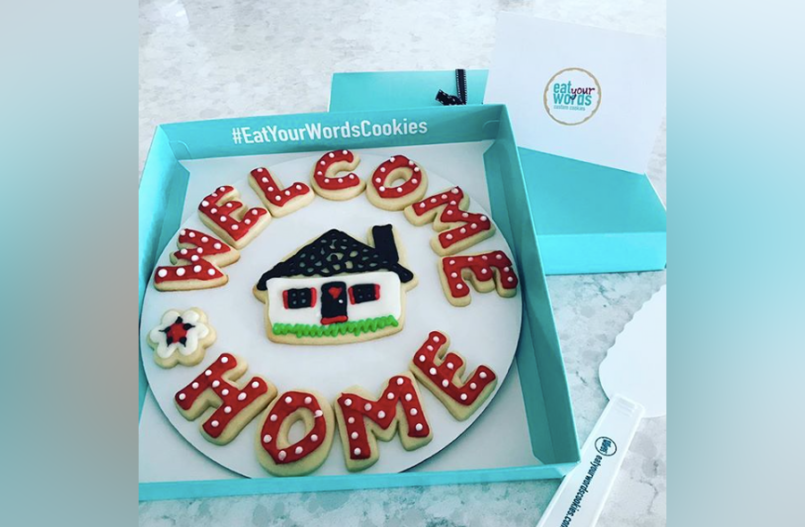 Holly’s great grandmother, Bess, was a baker. With the untimely death of her husband, Bess needed to work to support her young daughter. She, her brother and her sister opened their first bakery in 1916. The family-owned bakery developed a reputation for excellence and eventually grew to 13 operations throughout the Pittsburgh area.

Holly got the baking gene from her great grandmother. She loved to make cookies, especially around the holidays. Her family and friends raved about her delicious, attractively decorated cookies.

Holly eventually studied communications and marketing and earned her MBA before starting her first corporate job at a Fortune 500 company. It was in the early years of that first job that she had an idea for a cookie business, but as a young professional quickly moving up the ranks, she tucked the idea away and focused on her career. Life moved on. She married, had a child and continued working. Holly and her husband divorced when her daughter was three. Since that time, Holly has shouldered most of the responsibility for parenting while juggling the demands of an outwardly successful career.

When she joined the Key Women’s Leadership Forum, Holly held a senior director position with a large publicly traded company. Her work focused on marketing strategy and sales enablement. She was good at it, but she wasn’t happy. Holly felt trapped in her job. Her daughter was now a teenager and beginning to look at colleges. The thought of leaving her well-paid position was overwhelming.

Holly brought the issue of feeling stuck and not being fulfilled in her work to her Key Women’s Forum. During the questioning phase, one of the women asked Holly if she had ever considered becoming an entrepreneur. She hadn’t thought of it in a long time, but that question triggered Holly’s memory. She remembered how much she loved baking cookies. She saw in her mind’s eye cookies in colorful letters, word puzzles and even company logos.

Holly began resurrecting her initial ideas for a cookie baking business. She dared to ask herself: “What if I left my demanding job and started my own cookie baking company?”

Holly stayed in limbo for the next year and continued to explore her idea with the group.  “Why would I, a single parent, want to leave a good paying job with benefits to try to be the next Mrs. Fields?” she asked the women rhetorically.

With the group’s support, Holly dipped her toe in the water and started baking on the side. She would bring in wonderful cookies for all of us to enjoy and even made gluten-free ones for those of us who are gluten intolerant. Some of the women in the forum hired her to make cookies for corporate events. Holly got serious about resurrecting her business plan from long ago. Now her business focuses on word messages of all kinds, from “Congratulations” to “Happy Holidays.” She also transforms her cookies into corporate logos.

The confluence of the encouragement from the group, her passion for baking and the example of other female entrepreneurs with families in the forum helped Holly to make the leap. In 2016, she started her own “confectionary communications company,” Eat Your Words Cookies, a century after her great grandmother started hers.

Holly‘s company is growing and she is invigorated because it’s purposeful for her – she found her “true north.”